In Amsterdams music scene there is no way not getting in touch with him. He is a unique character and has commit himself with heart and soul to the music. He is also part of the inner circle of the record store / label Rush Hour. San Proper. You probably know him and if not you're fucking gonna know him after this interview!

San Proper: Professor San Proper, S to the A to the N space (he then spells PROPER in dutch). My DJ name is San Proper (and than he spells his name again), same name, born and raised with that.

Nice to meet you San! We are here in Amsterdam and we just met a few minutes ago, so this will get very spontaneous..

San Proper: Yeah we're in the smoking area of the Volkshotel close to the bar and the reception, just the way we like it 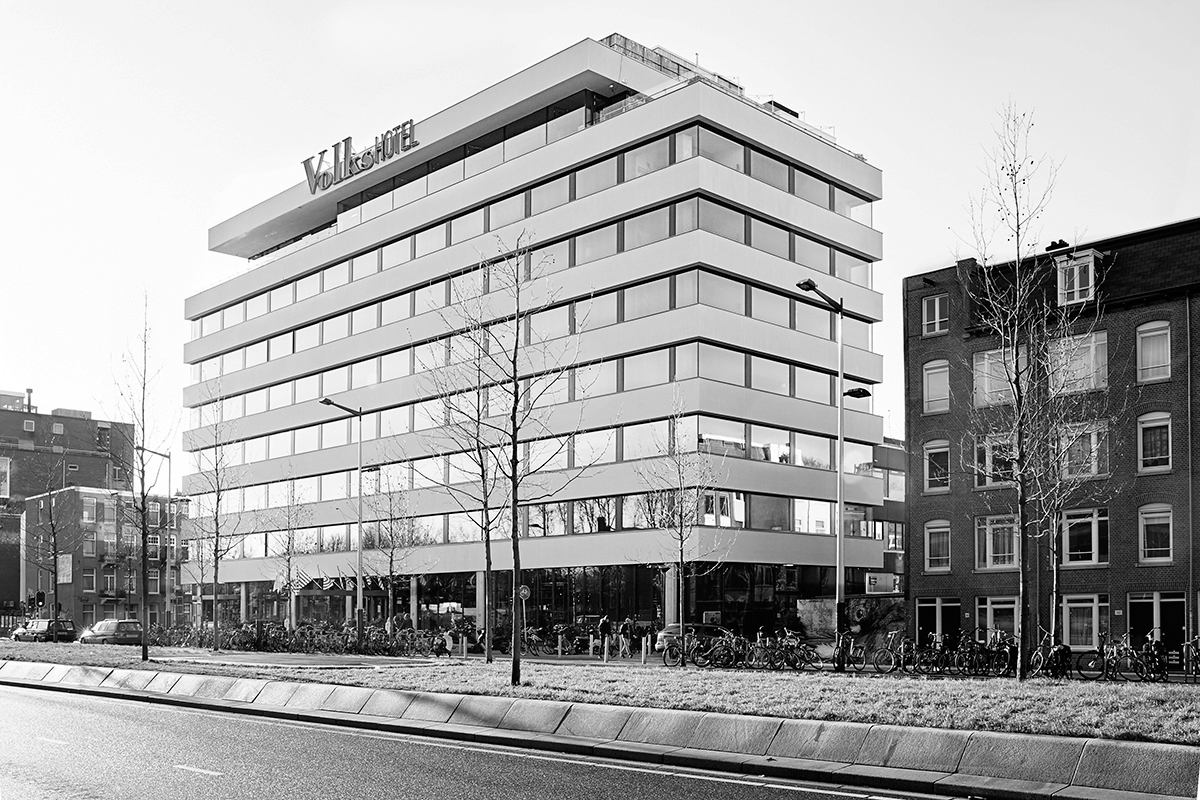 San Proper: In case you wanna check in or check out or smoke on or smoke out or drink on or drink down wuuhuu yeah man...

Really nice really nice, so tell me a little bit about you about your life and how did you come to music?

San Proper: Yeah yeah yeah let me spread this.. let me lay this out for you as quickly as I can. I'm playing guitar since I was about 8, 9 years old. My brother used to collect a lot of music whats actually got me on, into that. My first records which i actually owned were straight up theft from his collection and it includes Peter Tosh, Mama Africa with the album specials and a couple of tapes with Sam Cook, Otis Redding, The Rolling Stones, Lou Reid, Transformer and The Stranglers. I actually have every picture disc, every album, every 12“ of The Stranglers.

I've been quite militant for years about black music, and you know, when I say black music I'm talking bout The Coasters, Howlin' Wolf you know R'n'B from back in the days. Blues from the delta era. I'm talking about straight up disco, p-funk, I'm talking about Hip-Hop like, yeah, Schoolly D. So it is from all over the place and that's the way I've been working with music since I was like not even in my teens.

Then at one point after like been apposed with all the electronics. I discovered the likes of DJ Food, Aphex Twin, Mille Plateaux, even the first stuff Jeff Mills put out and a lot of crazy variety of electronic music. Then at one point I rediscovered a lot of disco and funk music which got sampled for house music with the filter-french-funk-wave but also like the Chicago stuff and the old Detroit stuff you know the straight up samples with the fucking electronic drum computer beat.

And this kinda of moved it together what people now refer to with San Proper sound. Me in Amsterdam, I've been pissed and spat up on for many many many years but for some reason since the last decade I actually get some respect from the people here in Holland. And since I started putting out records at Rush Hour, the record label slash record store, on an international base I also got some love and respect.

This is making me tour the world. From Tokyo to Rio de Janeiro. From London, Paris, Berlin back to Amsterdam. A lot of Italian gigs, a lot of French gigs, a lot of German gigs. I try to keep it close to home but the States, South America, Asia, Australia its all over the place now. And just because they love this cheeky little live sound I bring.

I love to produce records where I fuse electronics and live segments, like my vocals, my guitar play, my bass style, my live percussion, the drums and the electronics, the synths, the Junos, the fucking 808, 909, all of 'em, its all up in there. To fuse electronic and acoustics it's kind of life in a nutshell, what Dr. San Proper is about. And I'm just lucky because I've been struggling for years, keeping my fist up and you know, maintaining to do what I do and since the last decade suddenly people actually like to accept it.

So you're just a stand up man, you never fall and if you fall you just get on?

San Proper: Mhm... I crawl, even if people are like put a cut in my fucking knee cap I still go on.

So you're just doing your thing showing people...

San Proper: You know I've been raised by the likes of The Coasters, Howling Wolf, people like this. They have been struggling. They told me how to do and that's how I do. I'm sorry to say this, but this is the way I work.

That's how you should do it! You should never listen to what people tell you. You just have to do your own stuff.

San Proper: I do have to admit that this isn't coming without a price, because most of my relationships, you know, blow up in my face because of this stubbornness. You know being stubborn, its not really the way.

Its not the nicest thing but the best is, at the end you can look in the mirror and say: look that's my way, I did it, that's my way!

(Wants to ask something but San Proper somehow knew the question and goes on....)

Yeah that's the best part of it.

What's your favourite track you ever did? Do you have one?

San Proper: San Proper: I'm also not really into sports that much. Although I'm trying to get into sports that's why I doing Tai Chi. And I've been recording a video about me being a boxer and I'm really into boxing, shadow boxing, kung-fu, samurais, the sword style and the Tai Chi sword style. But it's, I'm very very very unskilled when it comes to that you know because I love to drink. (Both laughing). And this for some reason seems to like kind of sabotage my sports career like, you know there's much more to it and I think some sports are like art and some other artisan styles are like that as well. And me, when I produce together, I do make a lot of collaborations in the studios, but I always bring a tupperware of food because I think food and music work well together.

I just can agree with that.

San Proper: And painting and music works very well together and so on, you know. Wait hold on for a second...

San Proper: Ey Antal (Owner of Rush Hour is the one calling) the lord of lords of Rush Hour where you at man?

(He then proceeds in Dutch for two sentences and ends the phone call.) 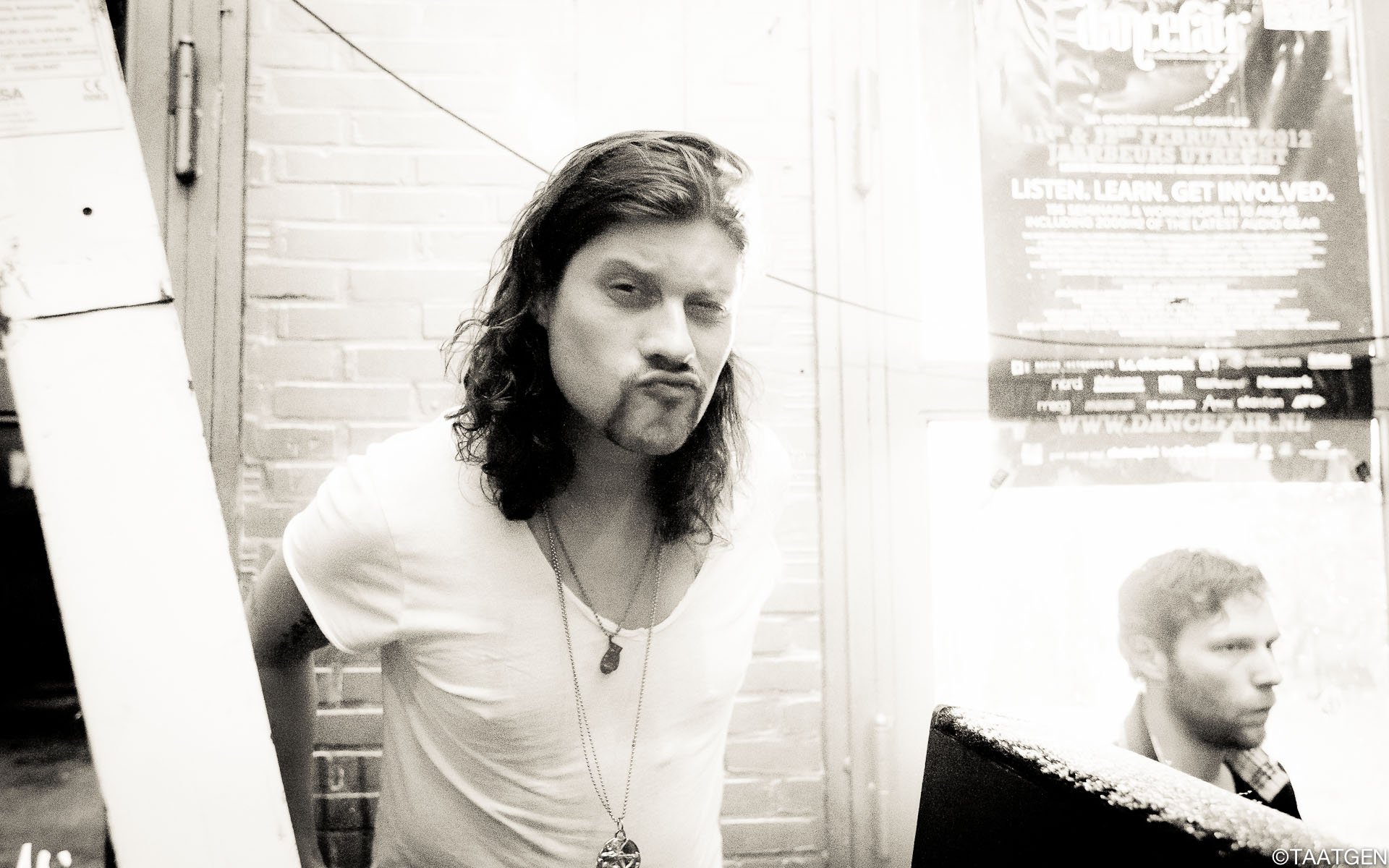 San Proper: We'll have to wrap this up soon. This is Antal from Rush Hour the Big Kahona, the Kingpin of Rush Hour and he's in the car with his girls.

San Proper: Yes with his little, with his children.

Just one more question from my site. If you could do a festival, so you can make the line-up?

San Proper: Hm, hold up! Let me first come back to the last question you asked me about my favourite blabidibla, and what I was about to say that it is not a competition there is no match. It's not sports. That's why I brought up sports into the mix. But I think I can appreciate any place I've played at, any organisation and any label! I know how to recognize what it's about instead of making a comparison you know?

Yeah I know what you mean

San Proper: And the same thing goes for my favourite track, favourite club, favourite country and favourite city. That's all bullshit! You know, this city is beautiful from this prospective and this city is beautiful from that prospective. Zurich, Lausanne, Geneva I love all of this cities and that's just Switzerland you know what I mean? We don't have to choose! I'm Jewish, Buddhist, Muslim and I even love Jesus Chirst but that's just because I actually think that its me.

So you see no borders?

So if there are no borders...

San Proper: The borders are the ugly side of every fucking aspect, of every country, city, government or people. You know there are so many ugly sides to every story, even to my fucking personality there's an ugly side but I don't wanna stretch that out all the time. It's about focusing on the right stuff, you know, unless you are a fucking rapist, or a pedophile or a terrorist (which is also sometimes even quite OK, you know, lets focus on the good stuff). Keep it positive and motivate each other and keep each other up instead of putting each other down. It's yin yang.

It's ying yang, yes. So one more question...

San Proper: I actually didn't answer the last one did I?

You did. You said there are no borders to you and everything is good on one side and bad on the other.

San Proper: Alright. So lets do one more and than I get myself a drink to go for some quality time with the kids.

Perfect. So back to the festival question. If you could do your own line-up?

San Proper: I would leave it up to my boys from Dekmantel, cause they actually run the best fucking festival in Europe right now. They prove to show how small and intimate you can keep a festival with only a couple of stages. They prove to like present a festival with only good artists performing and they also showed us that you can actually run a festival without just having dirty fries and cheap-ass meat being served you know? The people who are at this festival they are cleaning up the territory all the time. Only vegetarian food. Only good artists performing. The location is perfect, it's just solid! Not to many stages, good food and quality people. I used to do parties and present club nights but I realized that each is it's own.

(He then talks to Antal again on the phone but apparently Antal cant hear him.)

San Proper: So one more question, quickly because I have to go.

When someone comes to Amsterdam. Do they have a location they should go visit?

San Proper: The location they should have gone to is just across the street, its Trouw. But its over. And now we have like many many locations we try to live up to that feel. And they have been schooled and they changed, for the better, but its still different. Nobody can live to what happened across the street. Now, I'd suggest if Swiss people can get their pocket money together and come to Amsterdam they should come to this hotel. It's funky and its cheap. But they should definitely come out to Studio80 to ProperCult, because that's my Label Night.*

So thank you very much! It was nice to meet you!

*Unfortunately the Studio80 had its closing. (We hope San will find a new home for his ProperCult Night..)